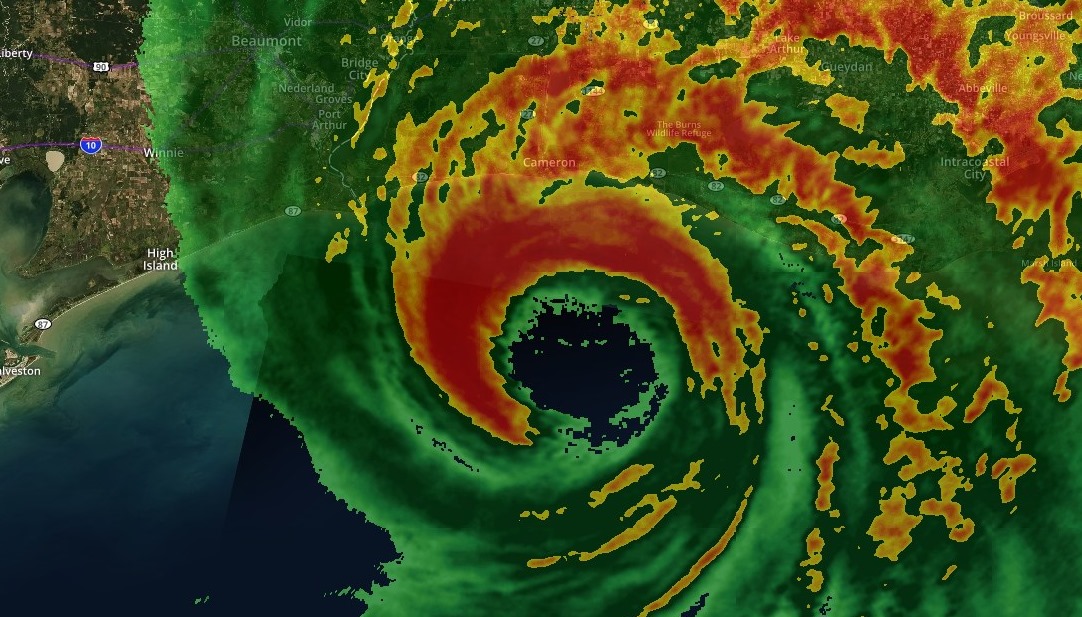 Hurricane Laura made landfall near Cameron, Louisiana, about 30 miles east of the Texas border at 1 a.m. CDT on Thursday, August 27, 2020. According to the National Hurricane Center, the Category 4 hurricane was slamming the coast with 150 mph winds. Cameron is a small community of only 400 residents. The region is where Hurricane Rita made landfall in 2005.

According to the president of the Calcasieu Parish Police Jury, some people had remained in town and were immediately affected when the storm hit. He said that there is no way to get to them. There is hope that stranded citizens could be rescued later on Thursday. Blocked roads, downed power lines and flooding are blocking the way.

Soon after landfall, there were reports that 290,000 homes and businesses were without power in western Louisiana and eastern Texas. The sky lit up with constant lightning, which offered the area its only light.

Prior to landfall, it was wide believed that the storm surge would cause large and catastrophic damage. Authorities were saying that the surge could reach 15-20 feet in Port Arthur, Texas, as well as a swath of Louisiana in the proximity of Lake Charles.

However, the storm surge was not as bad as expected. It was only half of what was predicted. Hours after landfall, the hurricane was rated a Category 2 with maximum sustained winds of 110 mph. It’s center was reported to be beyond Lake Charles moving north at about 15 mph. Damaging winds were howling over much of Louisiana and eastern Texas.

The evacuation of the area was the largest since the start of the Coronavirus pandemic. Officials refused to open mass shelters fearing that they would worsen the spread of COVID-19. So fleeing citizens took refuge in hotels or slept in cars.

Authorities said that at least 150 people refused to leave Cameron Parish and said that they planned to shelter in place. Many held up in elevated homes and recreational vehicles.

People who remained in the area reported that the devastation was awful. Many claimed that whole communities were washed away.

Forecasters expected the storm to weaken, but still cause widespread flash floods in states far from the Gulf Coast. Prognosticators guessed that Laura would turn toward the east and reach the Atlantic Ocean. It could again become a tropical storm before going on to rattle the Northeast of the U.S.

Laura was the seventh named storm to hit the United States in 2020, setting a record for the most landfalls by the end of August. The old record was six set in 1886 and in 1916.

In Lake Charles, Louisiana, Laura forced down a controversial Confederate monument. Officials had voted to keep the statue earlier this month.

The storm went on to hit Arkansas and was expected to weaken as it traversed Kentucky and Tennessee through Friday morning, August 28. The storm could spawn tornadoes in parts of Arkansas and western Mississippi on Thursday.

Texas Governor Greg Abbott said that more than 5,000 and maybe as many as 10,000 people had evacuated east Texas.

As of 8 a.m. CDT, 500,000 people in Texas and Louisiana were without power. According to poweroutages.us, 407,000 customers were without power in Louisiana and more than 103,000 had outages in Texas. The National Hurricane Center said that in regions that experienced the worst devastation, power may not be restored for “weeks.”

Entergy Louisiana reported that 182,000 of its customers were without power statewide as of 8:30 a.m. CDT. The biggest outage was in Calcasieu Parish where there were more than 83,000 customers in the dark.

A company spokesman noted that about 9,000 contractors and linemen were gathering at staging sites and waiting to restore power. Work will not begin until the utility believes it is safe. The workers come from 20 states.

The worst hit parishes or cities, according to Entergy as of 5:45 a.m. CDT were:

There were no major power outages in metropolitan New Orleans as of 5:45 a.m. CDT, said Entergy.

The results of hurricanes and tropical storms are often power outages. So, it’s best to be prepared with a stand-alone generator that can provide you with power through the storm if the area’s utilities fail.

As storms get stronger, it’s best to be prepared. Call 847-516-8882 or visit www.apelectric.com and browse their supply of generators. Purchasing one can give you peace of mind during these crazy storm seasons.