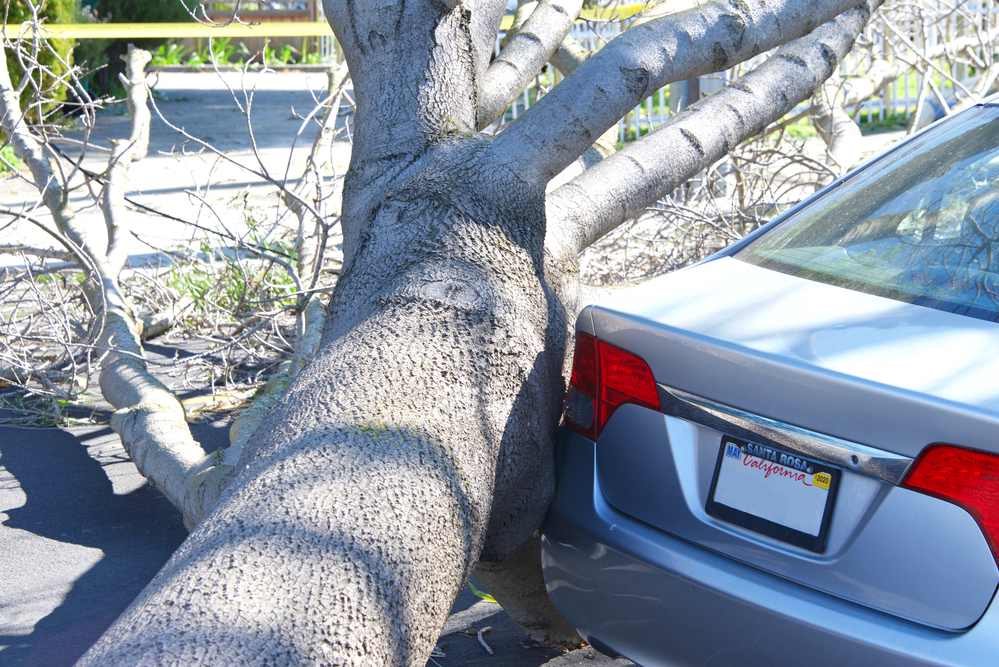 The National Weather Service reported gusts of 97-mph in Sonoma County as high wind alerts and advisories were circulated statewide. Forecasters predicted gust could reach 70-80-mph at higher elevations and 50-70-mph in valleys near the coast.

The winds were strong enough to cause trees to topple as well as considerable property damage and an abundant of power outages, the National Weather Service reported.

At least seven fires sparked up on Tuesday, according to the California Department of Forestry and Fire Protection.

Strong winds that reignited embers left behind during wildfires over the summer and downed power lines were described in Santa Cruz and San Mateo Counties. The earlier fires had caused a thick layer of “duff,” dead vegetation under heavy timer in which deep smoldering embers can be revived, according to a California Fire Department spokesperson.

More than 260,000 people throughout the state were without power as of Tuesday evening, according to poweroutage.us. The fires forced the closure of Yosemite National Park as well.

The wind gusts were first present on Monday, January 18th when more than 90-mph winds struck from Sacramento to the Bay Area. One gust reached 100-mph near Kirkwood, east of Sacramento, reported CNN.

For comparison, a Category 1 hurricane generates winds of 74 to 95-mph.

One hundred and twenty homes were evacuated in Santa Cruz County.

More high winds are expected to occur into Wednesday, forecasters said. High wind warnings and advisories continue across much of California.

A combination of high winds and low relative humidity are expected to continue extending the wildfire threat along coastal sections from San Francisco to San Diego.

AccuWeather predicted that the Los Angeles area including downtown L.A. would experience Santa Ana winds. It is not common for Santa Ana winds influence the downtown region or the L.A. Basin. However, according to an AccuWeather senior meteorologist, a perfect storm may be developing that will cause 30-40-mph wind gusts even in typically calm areas.

The winds also cut electricity to homes and businesses throughout Los Angeles and Ventura Counties. Some lost power when power lines fell due to the wind. Others had their power turned off.

Power outages can come when you least expect them. It’s best to be prepared with a standalone generator. Visit APElectric.com to view their inventory of generators from a variety of top manufacturers including Cummins, Westinghouse, Kohler, Briggs & Stratton, Generac, Firman, and Guardian. The website also includes a generator sizing calculator and offers information on how to select the proper generator for your situation.