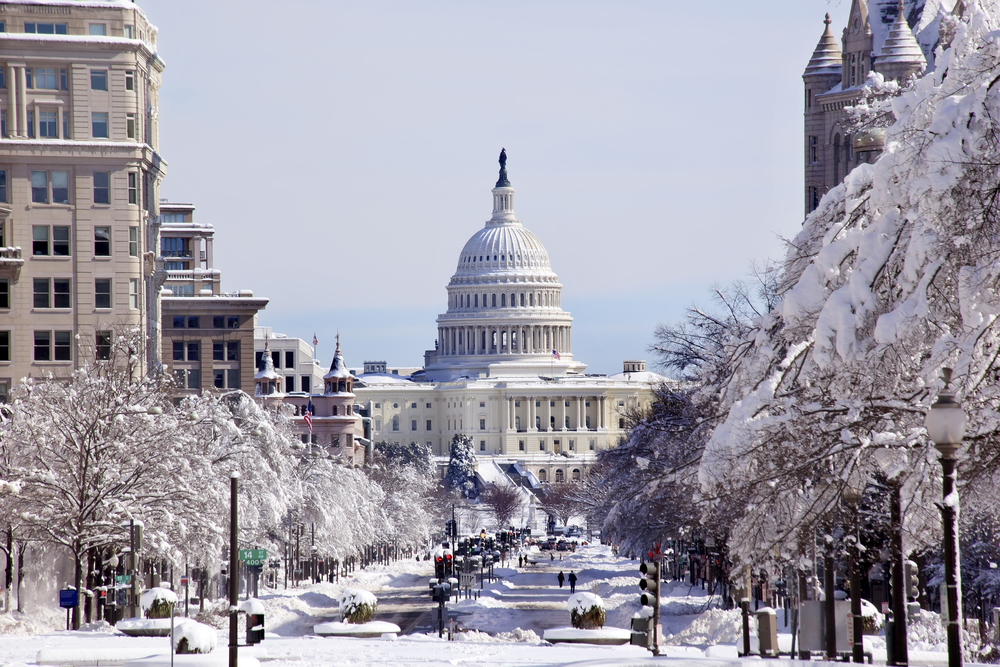 The first snowfall of 2022 reached Washington, D.C. on Monday, January 3rd closing government offices and schools. The Nation’s Capital and the immediate vicinity of Northern Virginia down to central Maryland is predicted to get as much as 10-inches of snow.

According to the National Weather Service, a winter storm warning has been issued, which is supposed to extend to 4 p.m. EST on Monday. Wind gusts of up to 35 mph have been forecasted. Travel is expected to be hazardous due to the severe conditions.

It is expected that more than 2 inches of snow will fall per hour in some areas of the Washington, D.C. metropolitan area and even thunder snow was possible. Localized snowfall totals could be 10 inches.

The storm that struck D.C. came out of the southern region of the country. Snow began falling on Sunday night in parts of Alabama, Kentucky and Tennessee. A winter storm warning was announced for parts of northern Alabama, southern Tennessee, and sections of Georgia, Kentucky, North Carolina and West Virginia. Early Monday morning more than 400,000 electric utility customers in Tennessee, Georgia, the Carolinas, and Virginia were without power.

The storm is expected to span across the South, Appalachian states, the mid-Atlantic and the upper East Coast.

Many schools in the region were closed or openings were delayed or students were expected to learn virtually on Monday. According to the Washington, D.C. Public Schools, students and staff weren’t expected to be in school until Thursday.

Early on Monday, the National Weather Service office in South Carolina noted that high wind gusts were reported that started knocking out power. As early as 6:15 a.m. local time, more than 125,000 utility customers were without power throughout South Carolina, reported the South Carolina Emergency Management.

Meanwhile, weather authorities were predicting severe rain and snow for the Northwest during the next few days. Rain will be pummeling northern California. The heaviest rainfall is expected in central and southwestern Oregon down into northwestern California. As much as 3 to 6 inches of rain may fall there in the next two days.

Heavy snow is predicted for the Cascades. As much as 2 to 4 feet of snow could fall. The Northern Rockies and northern Sierra are expected to get as much as a foot of snow.

A previous snowstorm from the west reached the Midwest on New Year’s Day. According to the National Weather Service, the snow began on Saturday.

Heavy snow was falling on Michigan Saturday night. As much as 6 inches were expected along Interstate 94 in West Michigan and 3 to 5 inches in the southeastern region of the state. Northern Indiana was expected to experience between 2 to 4 inches of snow by Sunday morning.

Chicago and surrounding suburbs were struck with snow coming from the southwest and heavy winds coming off Lake Michigan. The result could be as much as an inch of lake effect snow every hour.

Meanwhile, tornadoes ravaged Kentucky once again on Sunday. According to the National Weather Service, at least four tornadoes struck parts of the state.

Survey teams report finding evidence of tornadoes with wind speeds of between 85 mph and 110 mph on Sunday. The twisters resulted in damage south of Bowling Green, in Madison County near Union City, near Glasgow and in Taylor County near Campbellsville.

A second survey team found evidence of an EF-2 tornado striking Hopkinsville with winds approaching 115 mph on Sunday. Over all, more than 30 Kentucky counties were affected. So far, there has been no fatalities or injuries reported.

The storms struck the state in the wake of tornadoes that ravaged five states including Kentucky. Ninety people were killed during that event.

On Monday, January 1 at 9:07 a.m. eastern time, poweroutages.us reported the worst outages were in:

Power outages can strike any region of the country regardless of the season. For peace of mind perhaps you should consider the purchase of a standby generator to protect your home and family. Generators have been constructed to instantly turn on when the local electric utility is unable to supply power. Most generators feature a number of technological features including WI-FI and protections to assure the safety of all electric equipment in your home. APElectric offers a variety of such generators from some of the most popular manufacturers in the country. Visit the company’s website for more information, to review their inventory of generators, and get any questions answered concerning how to select the right generator for your situation.