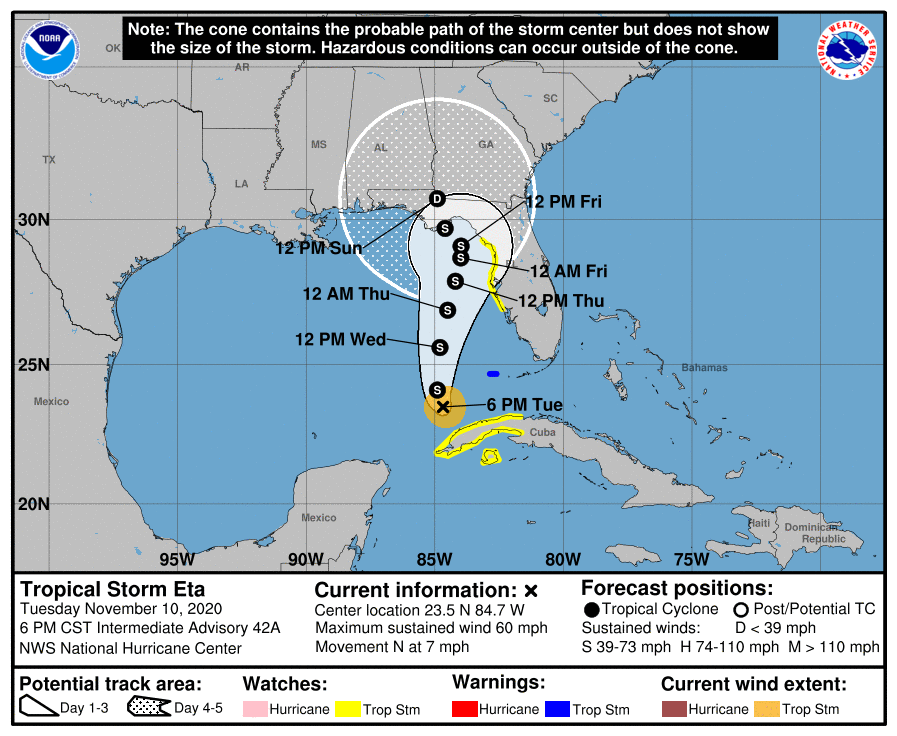 Tropical Storm Eta made landfall over Lower Matecombe, in the middle of the small islands that form the Florida Keys on Monday, November 9 th.

Heavy rains pummeled the most densely populated urban areas of south Florida. The state was already saturated due to more than 14-inches of rain last month. Forecasters predict that the storm could dump another 6-inches to 12-inches of rain.

The storm crossed into the Gulf of Mexico on Monday, November 2 nd near the Florida Everglades. Maximum sustained winds were reported at 65-mph. At the time the storm was south of Naples, moving west-northwest at 13-mph.

Forecasters predicted that it could intensify again into a minimal hurricane as it travels slowly up the southwest Gulf Coast. It is just far enough offshore to maintain its strength while dumping a lot of rain across the lower third of the Florida peninsula.

According to Dean Trantalis, Mayor of Fort Lauderdale, Florida, the storm is a “100-year” rain event.

Authorities in Fort Lauderdale sent as many as 24 tanker trucks with giant vacuums to soak up water resulting from rain due to previous hurricanes or tropical storms. The authorities noted that neighborhoods didn’t have any drainage due to the earlier deluge. In addition, the city distributed 6,000 sandbags to residents last weekend. Still, water eluded the bags and seeped into homes. Cars were stranded in parking lots and along roadways.

As Eta made landfall in the Keys, it was still savaging Cuba, just 90-miles south. The storm continued to bloat rivers and flood coastal areas on Monday. Approximately 25,000 people were evacuated. The Island is predicted to have a total accumulation of up to 25-inches of rain, Cuban authorities predicted.

The storm first struck Nicaragua as a Category 4 hurricane and devastated property stretching from Panama to Mexico. Authorities were evaluating the damage on Monday after days of severe rain.

Officials guessed that at least 68 people were killed. Hundreds more are missing and thousands were in shelters.

The counties worst effected with outages in Florida includes:

Eta broke a record and was the 12 th named storm to make landfall in the continental United States in one hurricane season. The previous record was nine named storms in 1916.

The National Hurricane Center reports that a Subtropical Storm dubbed Theta had formed in the northeastern Atlantic early on Tuesday and was traveling toward the east.

Forecasters are now monitoring a tropical wave in the Caribbean that could develop into another tropical storm over the weekend or early next week.

Call 847-516-8882 or visit APElectric and browse their supply of  generators. Purchasing one can give you peace of mind during this record-breaking storm season.