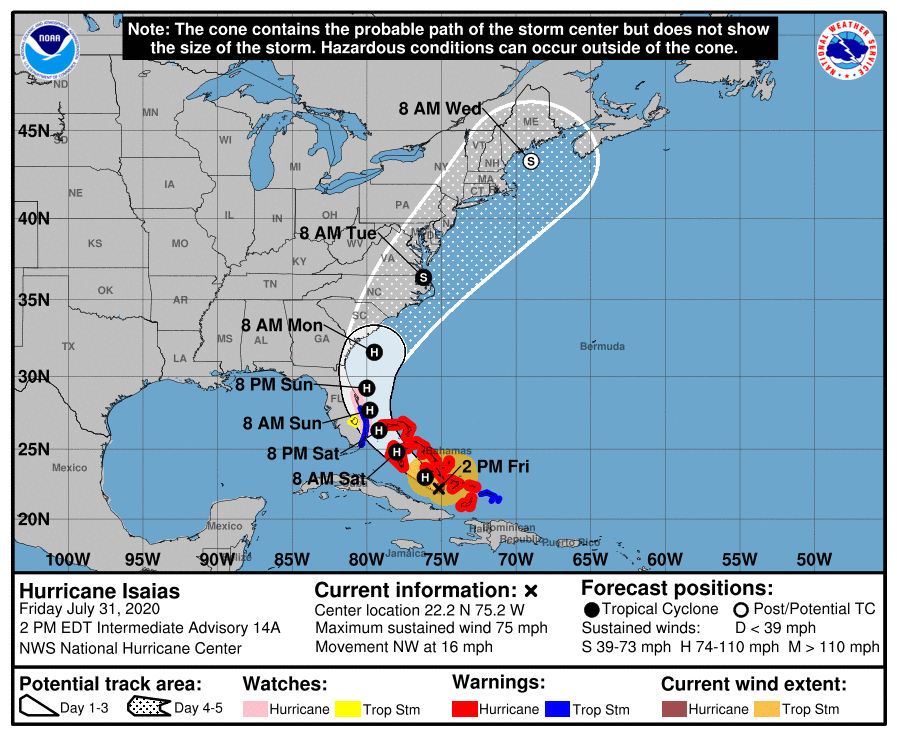 As Puerto Rico prepared to brace itself against Tropical Storm Isaias on Tuesday, July 28, the U.S. territory suffered a major power failure. Four hundred thousand customers were left without power.

The outage affected towns and municipalities throughout the Island including San Juan, Guaynabo, Jayuya, Naranjito, and Cabo Rojo.

The Puerto Rico Electric Power Authority (PREPA), which is attempting to negotiate through bankruptcy, blamed the problem on “internal terrorism” and demanded a federal investigation.

As if that were not enough, the electric utility received a letter from the Federal Emergency Management Agency claiming that it was not prepared to react to a “major event.” The island also continues to battle the rising number of COVID-19 cases.

At first, the issue seemed to have originated in a transmission line that connects to a natural gas power plant owned by EcoEléctrica and a power station owned by PREPA.

According to news reports, Caguas was the most affected town. There were 72,000 people without power there.

On Wednesday, July 30, a spokesman for PREPA blamed the outage on “human hand,” noting that a box of breakers had been manipulated leaving the region between Arecibo and Isabela without protection.

Although the utility continued to blame “internal terrorism”, a local newspaper challenged the claim saying that the incident was due to the nature of the failure.

Back in 2006, the utility had blamed an outage on a terrorist group that it claimed started a fire in a San Juan-based power station. An FBI investigation had concluded that the failure was due to a maintenance issue.

Another outage was reported on Wednesday morning, July 29 due to a failure of a transmission line in Yabucoa. News reports guessed that at least 33,000 people lost power in this incident.

Problems with the Puerto Rican power grid began after Hurricane Maria devastated the island in September 2017.

In October 2019, Puerto Rico announced a $20 billion program to repair the power grid so that it could withstand winds as strong as 160 miles per hour. Still, power outages continue on the island.

As Puerto Rico tries to cope with another power grid failure, Florida was bracing for Hurricane Isaias. It had been classified as a Category 2 storm with winds of 80-mph. The National Hurricane Center predicts that winds will reach 100-mph on Saturday.

It appears for now that the hurricane is targeting the east coast of Florida. A tropical storm watch has been reported for Ocean Reef to Sebastian Inlet and for Lake Okeechobee.

The National Weather Service in Melbourne, Florida, predicts strong winds and heavy rain and dangerous beach conditions for the weekend.

It is believed that Isaias will be near the Central Bahamas tonight, Friday, July 31. It is expected to move near or over the Northwestern Bahamas and come close to Florida by Saturday and Sunday.

Maximum sustained winds are about 80-mph, with higher gusts. It is possible that the hurricane could strengthen today, Friday, July 31, meaning that the storm will remain a hurricane for at least the next few days.

Latest models show the hurricane striking Florida and moving northeast up the U.S. east coast. Rainfall could reach as far north as North Carolina by Monday morning. The storm may continue skirting the east coast of the U.S. up to Maine Monday and Tuesday.

If you live along the east coast of the United States you are probably very familiar with hurricanes. Although it is rare for a hurricane or tropical storm to continue on to the coast of Maine, it has happened. Residents should be prepared. Power outages are often associated with hurricanes and tropical storms. To prevent such an occurrence to your family, maybe you should consider purchasing a stand along generator to assure that your home or place of business is supplied with electrical power.

APElectric offers a wide range of stand-alone generators from such manufacturers as  Cummins, Westinghouse, Kohler, Briggs & Stratton, Generac, Firman, and Guardian. They have a large inventory to choose from. Many models feature Wi-Fi so that you can monitor and control the generator from anywhere on Earth. Their website also includes a  generator sizing calculator and offers information on how to select the proper generator for your situation.