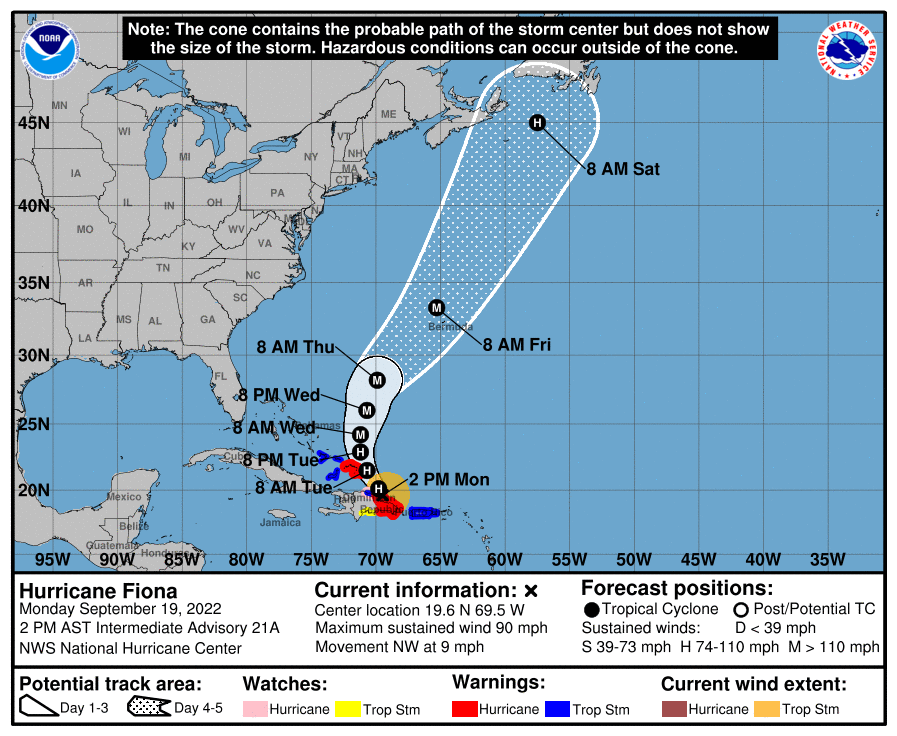 Fiona is the latest of hurricanes that has savaged Puerto Rico in the last few years. The storm caused landslides, knocked out power, ripped up asphalt from roads and hurled the pieces. The hurricane struck just two days before the anniversary of Hurricane Maria, a Category 4 storm that hit on September 20, 2017. The storm destroyed the island’s power grid and killed nearly 3,000 people.

Rushing waters enveloped cars, first floors of buildings and an airport runway. Hundreds of people were evacuated or rescued.

Forecasters predicted that the storm would batter the island with historic levels of rain on Sunday and Monday. Thirty inches was possible in eastern and southern Puerto Rico.

The storm’s clouds covered the entire island and tropical storm-force winds extended as far as 140 miles from the eye of the storm.

President Joe Biden declared a state of emergency in the U.S. territory. Luma, the company that operates power transmission and distribution reported that the storm included winds of 80 mph, which disrupted transmission lines. As a result, the whole island was blacked out. A spokesman for Luma cautioned that current weather conditions were extremely dangerous and were delaying the company’s ability to evaluate the situation.

Health centers were relying on their own generators and some of them had failed.

More than 3,000 homes still have only blue tarps serving as roofs. The power grid and the remnant of infrastructure remain weak.

Many residents are complaining that there are scarcities of food and other products ever since Maria hit the island.

The storm is predicted to thrash cities and towns along Puerto Rico’s southern coast that have not yet fully recovered from a strong of strong earthquakes starting in last 2019.

The water worried many as reports predicted 12 to 16 inches of rain over eastern and southern Puerto Rico.

The hurricane was forecasted to strike the Dominican Republic on Monday and then more north toward Haiti and the Turks and Caicos Islands with heavy rain. The storm could threaten the southern end of the Bahamas on Tuesday.

A hurricane warning was posted for the Dominican Republic’s eastern coast from Cabo Caucedo to Cabo Frances Viejo.

Prior to Puerto Rico, Hurricane Fiona battered the eastern Caribbean, killing one man in the French territory of Guadeloupe. St. Kitts and Nevis also reported flooding and downed trees.

Meanwhile, Tropical Storm Madeline was forecasted to cause problems in the eastern Pacific with heavy rains and flooding across parts of southwestern Mexico.

No one is safe from the ravages of severe weather, but you can take precautions and purchase a standalone generator to assure that your home or office is receiving plenty of power.

APElectric is offering a wide range of generators manufactured by some of the most well known companies in the country. Visit the company’s website to discover more about what the company is offering and learn how to select the ideal generator for your situation.