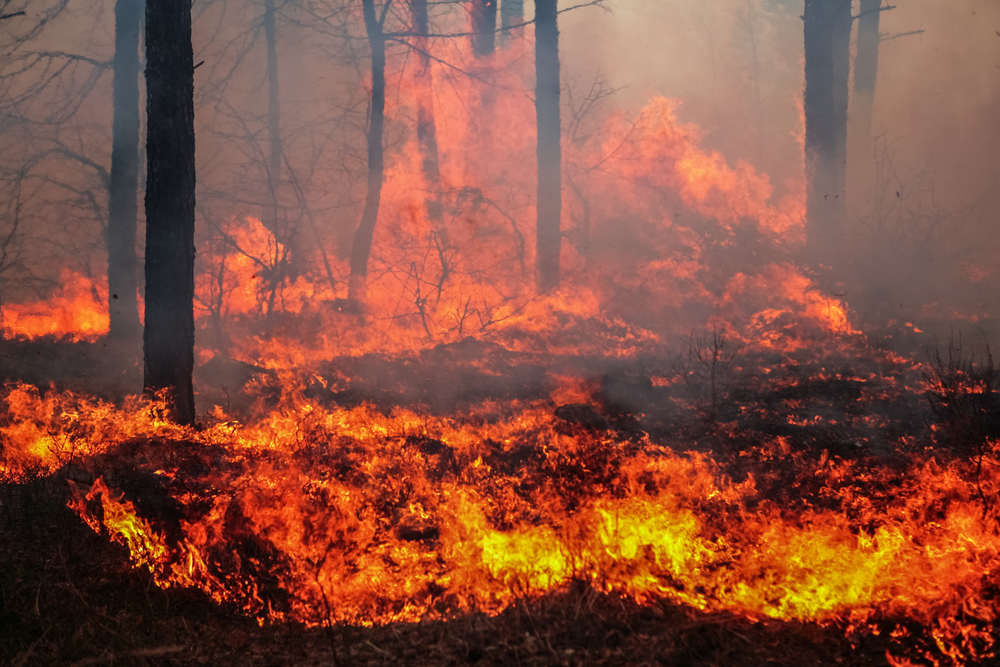 The night skies looked otherworldly as residents of California, Washington, and Oregon contend with record wildfires and power outages due to record setting heat waves.

Three large wildfires were still burning in California at 9:32 a.m. Wednesday, September 8, 2020. The Creek Fire has overwhelmed the Fresno region in central California causing the emergency evacuation last weekend of more than 200 people vacationing at a reservoir. The fire was 0% contained as of early Monday, September 7th. The blaze consumed about 79,000 acres of land.

Officials in Madera County, California announced evacuation orders and pleaded with residents to leave the area.

In San Bernardino County, southeast of Los Angeles, a fire that authorities blamed on a pyrotechnic device used during a party, kept burning through the night of Tuesday, September 8th.

Southern California wasn’t spared. East of San Diego, about 400 firefighters struggled to subdue the Valley Fire, which scorched more than 100,000 acres in Cleveland National Forest. The inferno was only 1% contained when authorities deployed military aircraft to assist in the fire fighting and to contend with the rapidly spreading fire.

As of Monday, September 7th, wildfires have charred a record 2 million acres in California so far this year. The possibility of more destruction caused the U.S. Forest Service to close all eight national forests in the southern half of the state.

A three-day heat wave on Labor Day weekend caused severely high triple digit temperatures to a great portion of California. The state’s largest utility, Pacific Gas & Electric was preparing to shut off power to 158,000 customers in 21 counties in the northern half of the state to minimize any possibilities that power lines and other power equipment could cause new fires.

Firefighters struggled to save the small town of Shaver Lake. About 30 houses were destroyed before the fire was contained.

Sheriff’s deputies were traveling door to door to assure that residents were complying with orders to evacuate.

California has experienced 900 wildfires since August 15th, many of which began due to an intense series of thousands of lightning strikes in mid-August.

On Saturday, September 6th, Pacific Gas & Electric said they were considering shutting off power to as many as 103,000 customers starting on Monday because of strong winds and potential fire danger. A red flag warning is in effect for much of the state starting on Monday at 10 p.m.

The sizzling temperatures and wildfires expanded into Oregon and Washington State. In Oregon, about 100,000 homes and business were without power on Wednesday, September 9th. Crews battled fires in Clackamas County on Tuesday and some residents complied with orders to evacuate.

Oregon Governor Kate Brown announced an emergency “conflagration” order that frees state resources for battling several wildfires that exceed the capabilities of local fire departments. Some reports blame downed power lines for some of the blazes in the state.

Despite the chaos in Washington, the Washington Commissioner of Public Lands said that there were no deaths or serious injuries in the state.

The U.S. Forest Service that covers the Pacific Northwest Region said that there are 20 large wildfires burning across Oregon and Washington and that as much as 476,000 acres have been destroyed.

As of today, Wednesday, September 9th at 9:19 a.m. the effected states with power outages included:

The outages in Louisiana are remnants of outages resulting from Hurricane Laura. Power outages in Utah are due to high winds in the northern region of the state.

No part of the calendar year is safe from potential power outages in any region of the United States. For peace of mind during uncertain times, maybe you should consider purchasing a portable or air cooled generator. Contact AP Electric – www.apelectric.com anytime or call 847-516-8882 Monday – Friday from 8 am to 5 pm Central for more information.