Hurricane Sally ‘Walks’ Into Alabama As A Category 2 Hurricane 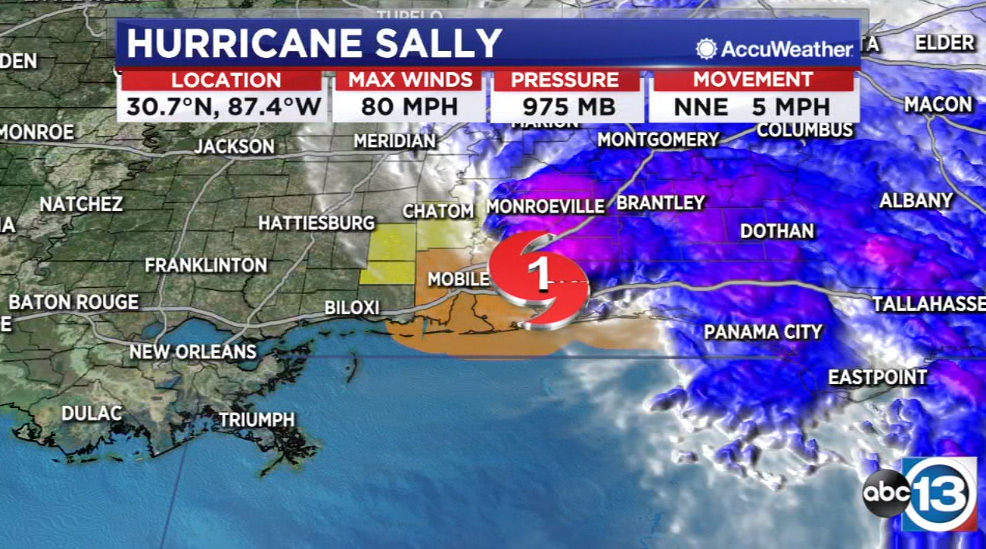 The pace of Hurricane Sally was slow, but it slammed into Gulf Shores, Alabama as a Category 2 storm with sustained winds of more than 105 mph. It pushed a seawater surge onto the coast and torrential rain that forecasters predict will result in dangerous flooding from the Florida Panhandle to Mississippi and more flooding fairly far inland in the next few days.

Last weekend the National Hurricane Center was predicting that New Orleans would be the location of the landfall. The city is about 200 miles west of Gulf Shores.

One could say that the storm “walked” into Alabama as it made landfall at 4:45 a.m. on Wednesday, September 16, 2020 near Gulf Shores at an excruciatingly slow pace of only 3-mph. It had just skirted along the Gulf Coast of Florida prior to landfall depositing hurricane force winds and rain from Pensacola Beach, Florida westward to Dauphin Island, Alabama, for many hours.

State officials in both Alabama and Florida noted that flash floods were being pushed into residents’ homes. More than 2-feet of rain pummeled in the region near Navel Air Station Pensacola as well as other coastal areas. The zone experienced nearly 3-feet of rain, forecasters reported.

Downtown Mobile, Alabama was in the dark. Trees were bent as the rain blew sideways in the torrential winds.

About 500,000 homes and businesses lost electricity in the early morning of Wednesday, according to poweroutage.us

As of 10:20 a.m. EDT, the affected areas being ravished by Hurricane Sally had a total of 554,775 electrical customers without power. The breakdown by state was:

A curfew was proclaimed for Gulf Shores hours before the storm arrived and Florida officials shut down parts of Interstate 10 near Pensacola due to high winds.

A spokesperson for the National Hurricane Center said that the rain would be “catastrophic and life-threatening” over sections of the Gulf Coast, Florida Panhandle, and southeastern Alabama.

Hurricane Sally affected a large swath of the northern Gulf Coast. The surge overwhelmed Low-lying properties in southeastern Louisiana and water submerged Mississippi beaches and sections of the highway that runs parallel to them. In Alabama, two large casino boats broke loose from a dock where they were under construction.

More than 17 million people were in Sally’s path. Hundreds of miles of coastline were under storm watches and warnings. Warnings extended from east of the mouth of the Pearl River to Navarre, Florida.

Sally is the eighth named storm to make landfall in the United States this year. It is the most through September 16 th in recorded history, exceeding the seven storms of 1916. The record for the most continental U.S. landfalls of hurricanes during one Atlantic Hurricane season is nine, set in 1916.

It is expected that Sally will cross-southeastern Alabama Wednesday night reaching Georgia on Thursday and the Carolinas on Friday. It is believed that about 10 to 20-inches of rain could be dropped on sections of Alabama and Florida, with as much as 35-inches of rain pummeling isolated areas.

The counties with the worst power outages included:

The devastating 2020 hurricane season has reminded many of the perils of global warming. According to scientists, climate change is causing the creation of stronger hurricanes, some of which feature wind speeds of 110-mph or more. In addition, the warmer air due to global warming holds more moisture resulting in rainier rainstorms and rising seas. All of this results in higher storm surges causing more damage.

Moreover, scientists report that tropical storms and hurricanes are slowing down once they make landfall in the U.S. The rate of speed has dropped about 17 percent since 1900. This allows hurricanes to dump more rain over one place, as was the case with Hurricane Harvey in Houston in 2017.

As storms get stronger, it’s best to be prepared. Visit APElectric and browse their supply of generators. Purchasing one can give you peace of mind during this crazy storm season.